Making it to the Office: How to Survive Your Commute Part One

The commute: everyone has to suffer through it before making it to the office.  If you live in Washington, DC it should come as no surprise to you that the region suffers from the worst traffic congestion in the United States, surging well ahead of Chicago and Los Angeles (ranked second and third, respectively) according to an annual study conducted by researchers at Texas A&M University.  With a yearly commute that is twice as long as the nation's average, D.C. drivers waste 74 hours (more than three of every 365 days!) sitting in traffic.

Factor in fluctuating gas prices, cash-only cabs, the 18% D.C. parking tax increase that went into effect in October of last year (not to mention exorbitant parking garage rates) and the psychological distress of sitting at a standstill while workers attempt to repair potholes on a Friday during rush hour – it’s no wonder the average commuter dreads traveling to and from work.  So here are a few tips to make your driving commute less time-consuming and ultimately less stressful:

Stay tuned for our next blog post with tips for metro travelers in this three-part commute series.  Safe traveling! 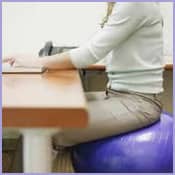 Balance your Way to Better Health!

Making it to the Office: How to Survive Your Commute Part Two