Up and Coming Apps 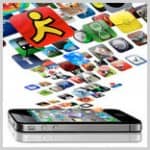 The social media landscape is constantly evolving with the introduction of highly-populated app markets for your smart phones, tablets, and computers.  Some are silly, while others are extremely useful, but at the end of the day the majority of apps are simply fun ways to spend time during a long commute to work.  So check out a handful of the upcoming apps that have people excited and see which one interests you!

-          Tweet-a-beer: this app uses an ecommerce platform called Chirpify that allows you to fuse your twitter and paypal account.  Via this platform, there is an ingenious option to send “beer money” in $5 allotments complete with a personal message.  So if you want to pay-it-forward to a colleague or seal a business deal by having a beer but don’t have the time, just tweet it!

-          SmugMug Camera: This new app for the iPhone will allow users to “show a level for the horizon, to focus on one spot while setting the exposure on another, or pre-record video.  The app records everything you’re pointing the camera at with a five-second buffer time”.  Furthermore, it comes with a handful of photo-editing tools such as cropping, “awesomizing”, and filters.

-          News.me: “News.me filters links from users’ social media streams, presenting them with the stories that are most likely to interest them.  It was developed as an iPad app from a prototype by the New York Times Company”.  If this app sounds intriguing to you as a news junkie but you don’t have an iPad, don’t worry, because there is an iPhone version in the works as well.

-          Ad Network director: “A mobile security company called Lookout launched an Android app this week that shows which ad networks have a presence on your phone.  More importantly, Ad Network Detector tells you what information the apps on your phone can access and how much of it they pass onto those ad networks”.  In light of the recent privacy debate surrounding google and facebook advertising, this looks like it’ll be a useful app for anyone who values their digital privacy.

-          Seamless: “Seamless makes it easy to order food for delivery.  Its new iPad app – with its giant photos of food – makes it pretty, too.  The company also has iPhone, Blackberry, and Android apps”.  So next time you forgot your lunch at work or need to quickly order food for a business meeting, this app will be a life saver!